STEALTH CANADA—deep-sixing the science on wireless radiation - EMF Off! 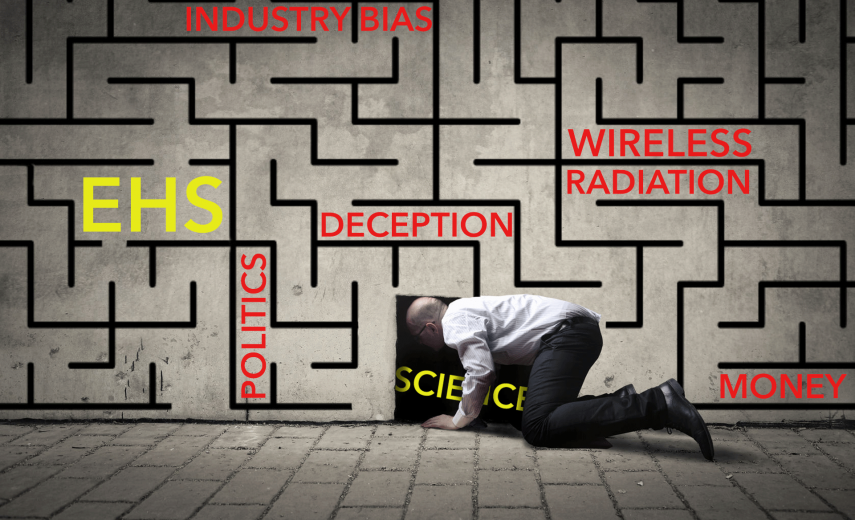 ​Health Canada is inspiring activism in even the most passive Canadians (especially those harmed by wireless microwave radiation from WiFi, cell phones etc)—motivating them to protect their own health, ensure their own survival, stand up for their rights, and tap into their compassion and humanity—since Health Canada seems incapable of doing any of these things for them.

Teachers, too, are being challenged to become empowered. If they dare to test the levels of radiation coming from WiFi routers in their school, to protect their own health as well as the health of the schoolchildren, or if they turn the router off when not in use, they can lose their job. One teacher in BC—Maria Plant—who has been teaching for 30 years, was forced to retire because the WiFi in her school became intolerable, and she now has such severe electro-sensitivity, as a result, that she can no longer lead a normal life. "It's been emotionally and physically devastating to slowly succumb to this disorder of EHS [electromagnetic hypersensitivity]," she says, "as it forced me to give up the two loves of my life: teaching and physical outdoor activity, because my inner ear and balance are most severely affected by radiofrequency signals."

Yet fighting for your rights can be hard to do when you're ill, and Plant says that EHS has resulted in depression and a crippling sense of defeat. "Sometimes, it feels as if it would be easier to just quit living," she says. "My personal life and relationships have fallen apart and I can no longer engage in social activism or contribute as a teacher and Union Rep. It has torn me from my close-knit community and the life-long friends who were my source of joy and support."

Paying for alternative medicines, therapies and specialists can be tough, for a single adult, but the financial burden of selling her home and moving several times, working part-time for five years, and losing her last five years of pension contributions has been overwhelming for Plant.

​Schools in BC refuse to accommodate those with EHS by turning off WiFi routers.

Worst of all, she says, is the ridicule and humiliation from uninformed doctors, specialists, colleagues and parent groups, friends, associates and family members who mocked her symptoms. "They did not believe me when I told them that wireless radiation was the cause of my illness, or the cause of the anxiety and the flu-like symptoms (vomiting, dizziness, head pain, eye pain etc) that my vulnerable seven-year-old students reported while working near the WiFi routers at school."

A growing generation of harm

If adults can be so severely affected, imagine what these high levels of non-stop microwave radiation are doing to young schoolchildren. One of them—12-year-old Tyler from Victoria, BC—can no longer go to school as the WiFi radiation causes severe headaches, vomiting, insomnia, night terrors and fatigue. Three schools in BC have refused to accommodate him by turning off the WiFi routers or hard-wiring the computers—which could so easily be done. Instead, Tyler is being denied his right to an education, not to mention being able to socialize with his friends, build important life skills such as communication and team-building, take part in sports, build his self-esteem or do any of the things that teenagers normally do as part of their healthy development. What kind of government refuses to allow children such as Tyler to go to school without being harmed—and knowingly harms all the other children who may not yet be feeling the radiation's effects? Why should any child—or adult—be denied this fundamental right, and instead be excluded and forced to function in isolation as if they were the problem rather than the toxic environment?

​Teachers can lose their jobs if they dare to test WiFi levels in schools.​

Browsing the Health Canada website, I discovered some other things that made me wonder what, exactly, Health Canada is, if not the government body tasked with protecting our health and safety. And why is their grasp of the English language so shaky? Their interpretation of the word protection, for instance, is iffy—as is their understanding of the values (such as integrity and honesty) that they promise to uphold.

For example, Health Canada claims to:

1) be responsible for helping Canadians maintain and improve their health, while respecting individual choices and circumstances [although claiming to be responsible for something is not the same as actually taking responsibility for it]. Yet it has:

2) communicate information […] to protect Canadians from avoidable risks. Yet it has:

3) be committed to […] making this country's population among the healthiest in the world as measured by […] effective use of the public health care system. Yet, because of the pervasive, government-sanctioned WiFi/cell phone radiation, which makes so many of us ill, it has:

4) rely on high-quality scientific research as the basis for our work. Yet it has:

​Health Canada is burying the science on microwave radiation.

Given these issues, I finally understand what Safety Code 6 is. Referred to as SC6 and intended as safety guidelines to protect our health, I now realize that it really stands for the Stealth Canada deep-6-it program. It's not about the science on the bio-effects of microwave radiation, which is absolutely solid; it's about burying the science—deep-sixing it, as they say. Finally, things make sense. Their ongoing denial, avoidance, misinformation, distortion of the facts, lack of accountability—it all makes sense when you put it in its proper context.

Despite this disturbing realization, I'm somewhat heartened to hear that Health Canada 'conducts ongoing consultations with Canadians to determine how to best meet their long-term health care needs' and I'd like to book a consultation, ASAP. We can start off by me further explaining the term protection, so that they understand the need to turn off WiFi and cell phones during our chat about how they can best meet my healthcare needs.

But I'm still skeptical. While I've always found Canadians to be sincere, open and genuinely caring, Health Canada officials don't seem to embody any of these qualities and I just can't figure out where they're coming from.

So I'm going to have to ask them some very specific questions, the most important of which is this:

What planet are you from?

Heads in the sand, pies in the sky: governments deny the facts of life